This St. Patrick's Wig will definitely make you stand out at your next Party, Hora Loca, Wedding, Corporate Event, Birthday, Quinceanera, or Halloween Party! It can be used as a wedding hats, top hats, photo booth props, or a party favor. Our products are handmade with love in Houston, Texas. At Foam Party Hats we believe our hats help bring a new joy and excitement to the traditional party. Give your next Party a new life and rediscover your youth with Foam Party Hats.

Made in the USA

One Size Fits Most

Customizable To Your Preferences

Free shipping on orders of $250 or more (Mainland US)

We understand that buying things online can be scary with companies not staying true to their customers so we go the extra mile to keep you satisfied. If you bought something from us and feel that it is not for you, don`t worry. Just send us an email at info@foampartyhats.com and one of our customer support representatives will reach out to you to make it right.

Reviews from Our Customers

I love everything about this! It’s comfortable. It’s unique. It stays on.it’s soft. You will stand out this St Paddy’s Day! 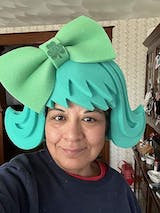 Can NOT wait to wear this! 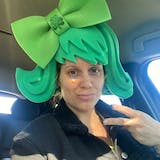 J
Jennifer
Everything was perfect!

Everything was perfect! Awesome product and awesome store, great service, expedited delivery. Our work parade costumes were a huge hit, thanks so much! 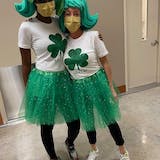 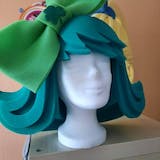 Our city does a pretty big St. Pat's parade every year, and this year it's going to roll after being cancelled the last 2. It's one of those family-friendly parades (which is saying something, as we're down here in Mardi Gras territory and some of those get a tad bawdy) that is just sweet and fun. And man, do you come home with some beads! Everyone decks out in all their greenery, of course, and the object is to be as flashy as possible so you attract the float riders' attention. I saw this "wig" and knew it would stand out in the crowd. This is a really neat thing. It's a cross between a wig and a hat. It just hugs the back and sides of your head. All you have to do is tuck most of your hair back - no wig cap or anything is necessary, since the "bangs" and such come down so low. It's also lightweight, which is a plus. I have a feeling it won't necessarily be cool to wear (and that will be an issue down here in the south), but it's still so much fun.
I do have some concern about long-term viability, as I could see this tearing up pretty easily - especially as we go to put beads over our heads, but I like it. I really do.

Not Finding Your Hat?